GNUnet is GNU's (yes, that GNU in GNU/Linux) framework for p2p applications. CADET (Confidential Ad-hoc Decentralized End-to-end Transport) is GNUnet's transport layer protocol. Think it like a replacement of TCP/IP. Practically it provides the following some over plain TCP/IP:

This post explains the basic concept you need to know to use CADET and shows how to send messages using GNUnet++.

To use CADET you need a working GNUnet installation. Hopefully you already have one. If not, you can follow the instructions in ArchWiki for a quick setup (yes, even if you are on Ubuntu, the basic idea is the same. Highly recomment to get the latest release from source. GNUnet sometimes changes protocol details, this keeps your node up to data with others). Once you have GNUnet installed, you can start the GNUnet with the following command:

You are good if nothing is printed to the console. That starts the entire GNUnet stack. You can check if CADET is up using gnunet-arm -I | grep cadet. If you see something like the following, then you are good to go:

Now let's install GNUnet++. GNUnet++ is my C++ wrapper around GNUnet's C API. It's experimental, but makes developing GNUnet applications much, much easier. You can install from source. Note that you need a C++20 compiler (likely GCC 11 or Clang 14) to compile GNUnet++. The dependencies are listed in the README.

Try running some examples in GNUnet++ to confirm both GNUnet and GNUnet++ are working fine. It shouldn't hang or print any error messages. But a very short period of nothing is normal if you just started GNUnet seconds ago. We'll talk about what's going on in the examples later.

The internet is broken

As many of network programmers know. No doubt, the modern internet is "broken" in may ways, from annoyance to serious privacy and freedom issues.

You may say: "Sure, but the government is just protecting the citizens. And I'm a law abiding citizen. Why should I care?" To that my reply is: Yes, but try saying the same thing when your government screwed up big time and you are in a protest. Knowing who you talk to on a day to day basis is probably fine.. ish. But when you are defending your rights, you don't want that information to be leaked and be used to target your allies.

GNUnet is designed to fix this. And CADET is GNUnet's replacement for TCP/IP. It's a protocol that is designed to be secure, private, and censorship resistant. It's also designed to work on any network. Only SSL is allowed? No problem, use the HTTPS plugin. You only have Bluetooth? Bluetooth daisy-chain to the rescue.

Disclaimer: I learned most of the following from the CADET paper and the GNUnet source code. I'm not a P2P expert. So if you find any mistakes, please let me know.

It's difficult to explain how CADET works in detail as it's still evolving. And more importantly, requires a lot of background knowledge. But I'll try to give a high level overview. GNUnet is is fromed by a set of computers that runs GNUnet (the thing we just installed earlier). Every node on the network has it's own peer identity and peers. Communicating directly to a peer is like sending messages on LAN in TCP/IP, no CADET routing is involved. You can still send messages to a peer using CADET, CADET just doesn't do much. The following image is the stack of GNUnet. Transport deals with direct communication between peers. While CADET deals with routing and delivering messages between peers in a secure and private way.

For distant nodes to communicate, CADET discovers a chain of nodes that can eventually reach the destination. This is a path. And multiple paths could exist between any two nodes. While sending a message, CADET picks one path for that message. And another for the next. And so on. This way no single entity can block all messages to a node. And backup paths are formed in case one path goes down. CADET also encrypts the messages so that no one can read them. 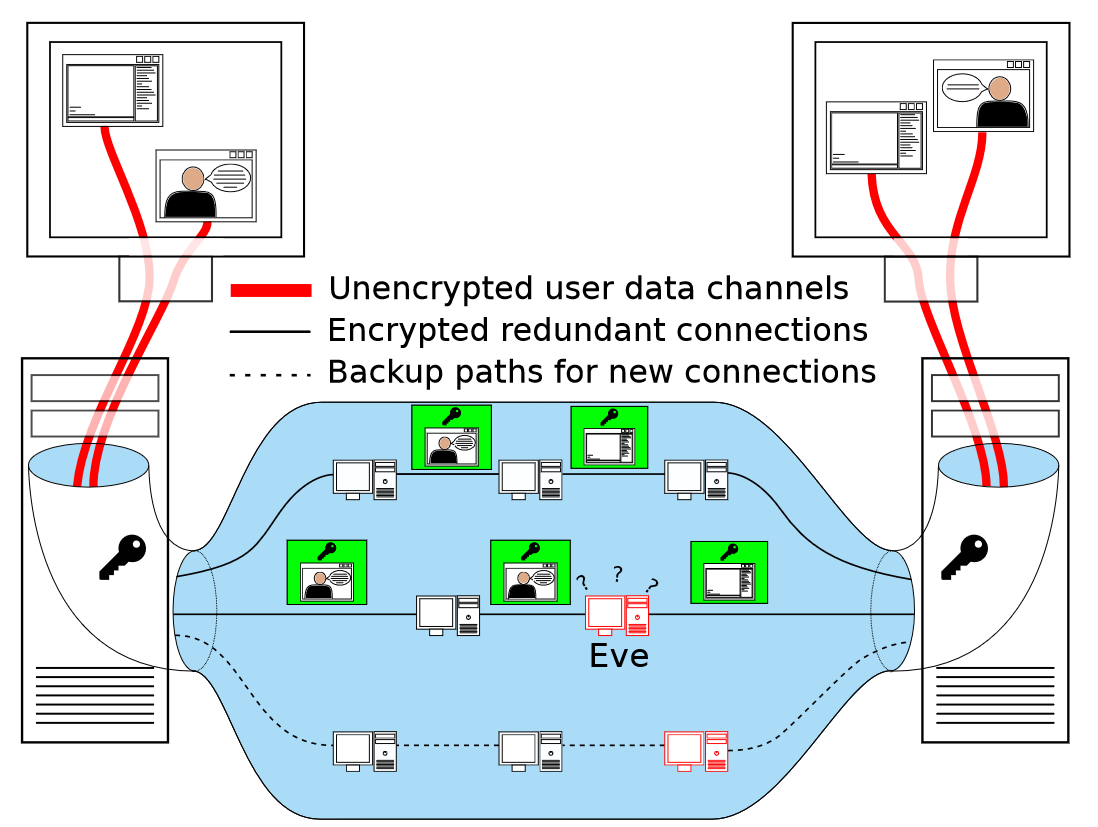 You might have seen a lot of confusing terms above. Let's go over them one by one.

A tunnel is a encrypted connection between two nodes. Think it as a virtual Ethernet cable. Many streams of traffic can go through a single tunnel. Furthermore, only one tunnel is created between two nodes. Different channels (we'll talk about next) are multiplexed over a single tunnel. The gnunetpp-cadet list-tunnel command we ran earlier shows the tunnels that is currently active.

A path is a chain of nodes that can be used to send messages between two nodes (by using a tunnel). A tunnel can have multiple paths. When a message is sent, a path is chosen from the available paths. You can see the paths to known nodes using gnunetpp-cadet list -p. Some nodes may have multiple paths and some have none. If none, it's likely CADET hasn't discovered a path to that node or the node is offline (among other reasons).

Your peer identity is a unique identifier for your node. It's a public key that is used to identify you among other things. It's the first line shown in ./examples/gnunetpp-cadet list

Why use CADET instead of libp2p? libp2p is a more mature solution then CADET. However, it's abilities are more limited. libp2p like it's name suggests focuses on P2P communication. CADET, besides P2P messaging, does mesh routing, censorship resistance, congestion control, and more. CADET also designed to work in very restricted situations.

Besides, GNUnet is not just a P2P library. It's a whole framework. No need to reinvent the wheel. GNUnet also provides a DHT just like libp2p. But also supports file sharing, decentralized name resolution and much more. I'm working on wrapping more GNUnet features in GNUnet++. Stay tuned.

Now let's write some code. We'll start with a simple example that sends a messages from stdin (usually your keyboard) to a server. Hopefully the following code is self-explanatory. If not, I'll explain later anyway. But notice that we are using C++ coroutiens instead of plain std::cin. This is very important. GNUnet itself is single threaded and fully async. So we cannot block the event loop at any point (on the same thread at least). Otherwise sending and receiving messages will not work.

And compile it with:

Now let's start the server. Let's go with the example server in GNUnet++'s examples. We'll build one later. It's a simple echo server. It will print whatever you send to it (if the message type is GNUNET_MESSAGE_TYPE_CADET_CLI. Open another terminal and navigate to GNUnet++'s build directory. Run the following command and observe it starts listening on the "default" port.

Now let's run the client we just compiled. Type something and hit enter. You should see the same thing printed on the server side. Then Ctrl+C to exit.

On the server side, you should see something like the following:

Next we create a channel to ourselves on the "default" port. Important! CADET ports are just strings. The 3rd argument is a list of message type we want to receive. CADET ignores messages unless we separately tell it to receive them. In this case we don't care about any message. So we pass an empty list.

Finally we read stuff from stdin and send it

Also be aware that there's no "connected" event. We just call connect and it will return a channel. CADET in this regards is more like UDP than TCP. If the other side is not listening, CADET will try reconnecting until it succeeds or give up (depending on advanced flags we'll not talk about). How to know if a peer doesn't exist or just isn't reply? You don't. A peer is as good as not existing if it can't reply in a reasonable time.

Side note: To specify a peer identity other then your own. You pur a string throught crypto::peerIdentity() function. For example, to connect to the peer with the identity Z6QYNW5G63KM5DZ8S9V57NXC5F6756Y98NH6CBEQRM12D6FYXHY0 (or any arbitrary peer) you can do the following:

A CADET server is just as easy as a client.

Compile and run it with:

Then open another terminal and run the client we wrote earlier. You should see the same thing printed on the server side.

On the server side, you should see something like the following:

CADET can work behind NAT and no extra configuration is needed. Let me quickly demonstrate it. I'll run a CADET client on my laptop connected to my home WiFi. Then a server runs on my workstation connected to my phone's hotspot. There'll be some more latency now as it's not a local connection thus requires more hops routing. But it works.

In the demo I'll be using the gnunetpp-cadet example program. Just because it shows more details than the quick example above. But the code is basically the same.

That's it. Simple, isn't it? Alright, that's everything in the post. I'm hoping to write more about P2P networks in the future. Hopefully eventually find a pratical, real-world use case. Signing out.